I just realized as we pull in to 2017 it’s been 40 years since Saab introduced the Saab 99 Turbo! This article is my reflections on my experience with what is my one of favorite cars of all time. 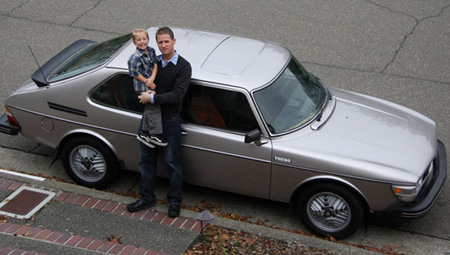 My 1978 Saab 99 Turbo. In this photo I had driven 3 hours through the beautiful Fall colors in the mountains of Northern California and vineyards of Napa Valley to be with family for Thanksgiving. One of my favorite memories of that car.

A few years later in 1985-1987 when I was in college in Boulder, Colorado, the Saab 900s – particularly the SPGs – were a coveted car to have. I was a bike racer and I also noticed on long training rides you’d see two kinds of cars in the small towns high up in the mountains: 4-wheel drive trucks and old Saabs.

However it wasn’t until 2000 that I bought my first Saab: a 1993 Saab 900 Turbo convertible. A year later I bought my 2nd Saab: a 1982 900 which I got for $800, so I now had two Saabs. I actually really loved the simplicity of the ’82 900, making it my daily driver and keeping the convertible for weekends. By 2005, with a baby in the house and another on the way, I had sold the convertible since it was no longer practical and was just driving the ’82 while I figured out my next car. My wife suggested I look at the newer, GM Saabs, which I resisted, considering myself a ‘classic Saab’ fan. However, I discovered the Saab Viggen and fell in love. In the Summer of 2005 I bought a gray 2001 Viggen and was absolutely crazy about that car. Yes it was a ‘GM’ Saab but I felt like they really did a lot to stay true to the classic Saab ethic and the Viggen felt like an SPG approach to the standard 9-3. My addiction to Saabs was really taking off at this point. The guy who sold me the Viggen – like many Saab owners – was so cool. He included a collection of Saab magazines, articles and books. An evening ritual became hunkering down with a glass of wine and delving into the old articles and especially the books to explore the history of this incredible car company. There was so much to love about the company, its people, its history and of course, its cars. I was in love with so many of the models, but the one that really found its way into my heart was the Saab 99 Turbo. It was similar to the 900 I was so familiar with, but had more of a snub nose and unique details that made it so close to the iconic 900 but also set it in a class of its own. A particular eye-catching detail was the Inca rims. There never was nor has been a wheel as uniquely cool as the Saab 99 Turbo’s Inca rims.

While I had my Viggen in the garage (which I loved) and the 1982 900 as well (which I also loved and drove regularly), I became obsessed with the 99 Turbo. While I continued to immerse myself in the history and details of the car, I also found myself regularly in the classifieds of Saabnet and eBay, drooling over the 99s. By later that year I had found “the one” and somehow convinced my wife to let me get it, in spite of having just brought our latest baby into the home. My 3-year-old son and I caught a flight from Redding, California to Seattle where we met the sellers that same day and started our trip home.

It was a great way to start my relationship with that incredible little car. We spent the first night right outside Seattle, then continued on down through Oregon. The 99 Turbo was such a fun car to drive. It did not have power steering so you really felt the steering and had to put some muscle into turning at times. The kick of the turbo was unique to the 99 Turbo as well: it had a very raw power in the way it kicked in that you really have to experience to understand how it is different from other turbos such as in the SPG.

Mainly I think because of its age, the Saab 99 Turbo just had a simplicity that made it feel simple, classic, raw. There were also a number of features that made the 99 Turbo unique.

It has a turbo boost gauge on the dash to the left of the steering wheel. It also had unique “Alligator Clip” seatbelt that did not have a clip. This always threw anybody off when they got in for the first time and started searching for the clip part of the belt. With these belts there was just a strap and you put into the Alligator Clip. You can see it in the video I produced which was another awesome day I spent with my 3 kids, again driving from Redding, spending some time in Clear Lake, California before winding through the mountains down through Napa into Sonoma County.

I sold the 1982 900 as part of my deal with my wife to be able to buy the 99 Turbo. Those were certainly incredible days with my two dream Saabs and to this day it would be hard to choose one over the other. That said, I have to conclude that the Saab 99 Turbo was my favorite of all the cars I owned. It uniquely captured the spirit and history of Saab and was a special pivot-point for such a cool company. It had the classic lines of the 900 but also had a raw edge and power that made it so damn fun to drive. Sadly I had to sell my 99 Turbo a few years back. Of all the cars I’ve owned, it’s the one I miss the most and I can’t help but hope I’ll find myself behind the wheel of one again someday.

You are currently browsing the Saablime – the Saab 99 Turbo Blog weblog archives for February, 2017.